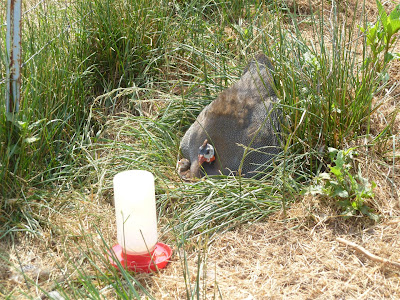 Our female guinea has been sitting on a nest for about a month now. She has about 10 eggs under her but I haven't gotten a good count because she is scary protective of the nest. She hisses and arches up and pecks if you get near it. This morning I was going down to throw some food at her and saw some broken eggs outside of the nest and then this little guy poked it's head out! She actually managed to hatch some eggs! This is a big deal for a guinea as they are notoriously bad at actually hatching eggs.

We have at least 2 keets that I've seen. And there are still some unhatched eggs under her, so I'm hoping for more. I still haven't gotten a good look at what is in the nest. I guess I'll need to drive her off the nest at some point just to see.

So we're debating, do we let her raise the keets or bring them in the house and raise them ourselves? Now that some have hatched I'd hate for them to die, but it seems rude to grab her babies after she did all that work to hatch them. We're thinking about seeing how many there are tonight and maybe taking half of them into the house and letting her keep the other half. Luckily, it is warm and sunny this week so we don't have to worry about them drowning or freezing.

These are the first eggs of any kind that have hatched on the farm so we're very excited!
Update: She's moved the keets off the nest and into a tall patch of grass. There are 2 eggs that didn't hatch, so I guess they won't. It appears there are 6 or 7 keets, but I can't get close enough to get a good count. When I tried, she flew from 10 feet away and slammed into my chest! I'm going to let her raise them....
Posted by Christy at 7:59 AM

I think I would let her have a go at it this time and see how it goes. If it doesn't turn out well you can take them in next time. (If she does well it will save you lots of work!)

Cool.
I finally am getting my garden fenced in so I can have Guineas. Are you keeping all of them?? I still need to get a secure living area in place for them, but my entire garden will be fenced by the end of this week(it was my birthday present).
I still have so much learning to do also, but I'm getting there slowly but surely, LOL.

Congratulations (to both your family and the guinea)!

Unschooler, unless your fence has a cover too, it probably won't keep the guineas in. They fly pretty good. Mine go wherever they want. The momma and the keets are in the middle of the yard in a tall patch of grass. We'll see how many make it to adulthood. I'm expect a few losses. But we'll probably keep them all.

That is so cool. Little baby guineas!!! Congrats.

Congrats! Yeah, keets!!! We have 25 guinea eggs under broody chicken hens right now. We expect about half of them to hatch. They are due to hatch this Sunday, but we think they may hatch Sat. All the chicken eggs I hatched always hatched one day earlier than expected. I am excited. We are going to let the chickens raise the guineas, when they are big enough they will form their own flock. We raised our keets like this last year, too, but we bought them as one-day-olds and gave them to a broody hen. This year we are trying it with the eggs from last years' keets. We'll see.....

Keep us updated as to what you do. We had keets hatched out last fall and took them away to raise in the brooder. We have cats and we were afraid the keets would become treats. They all survived and are doing well. If only we could convince the full grown guineas to stay out of the road and not stare down cars. Now that would be something.

Hi Christy, Congratulations on the keets!

I've sent an award your way. Come by and pick it up when you have time.

I've just started following your blog. Your farm looks wonderful, lost of wide open space! Looking forward to following you and your family in realising your farm dreams! Oh, and I love the Thomas Jefferson quote you have on your page!

Have a great day!
Dan from Melbourne.

Wow Christy, you haven't been in here for a long time! Hope everything is ok at the farm!

Linda, thanks for commenting! Things are good here on the farm. I actually plan to post an update soon. Life just got busy and I went through some rough times and didn't feel like updating. Hopefully, I'll post an update in the next week or so.

Older Post Home
Subscribe to: Post Comments (Atom)
"If people let government decide what foods they eat and what medicines they take, their bodies will soon be in as sorry a state as are the souls of those who live under tyranny."
Thomas Jefferson

We are a family of 3 finally living on a 5 acre farm in Georgia! Follow our journeys in turning our farm dreams into farm reality. 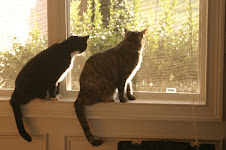 Farm:
• Figure out my overall focus for the farm
• Expand goat herd
• Plant more berry bushes
• Plant more fruit trees
• Improve garden soil
• Research and decide if I want to do bees
• Plant medicinal herbs
• Learn to make more herbal remedies
• Do something with Sweet Pea’s fleece
• Have more success in the garden this year